Danish goldsmith Ole Bent Petersen's professional footprints are impressive, but hard to follow. Though his jewelry and objects are not extensively available throughout the world, they are highly recognizable--there is a certain style and comparability in them--and the dedicated collector recognizes them at once, often without having to look at the hallmark. One can, however, come upon a piece by Ole Bent Petersen that is very different--that cannot immediately be attributed to the maker--he has many more facets than can be grasped at first sight.

Let’s follow him through the years and see what we can find:

Ole Bent Petersen was born in Denmark on April 12, 1938. By 1957 he had finished his training as a goldsmith at the silversmith’s workshop of P. E. Boesen in Nykøbing on Falster and was awarded a bronze medal for his "Meisterstueck" (masterpiece). This was his first award of many to follow.

From 1957 to 1959 Petersen was enrolled at the Danish College of Jewelry and, from 1959 to 1960, he studied silversmithing and commercial design at the Royal Danish Academy of Fine Arts and received an award from the Council of the Danish Goldsmiths for his new work of that period. 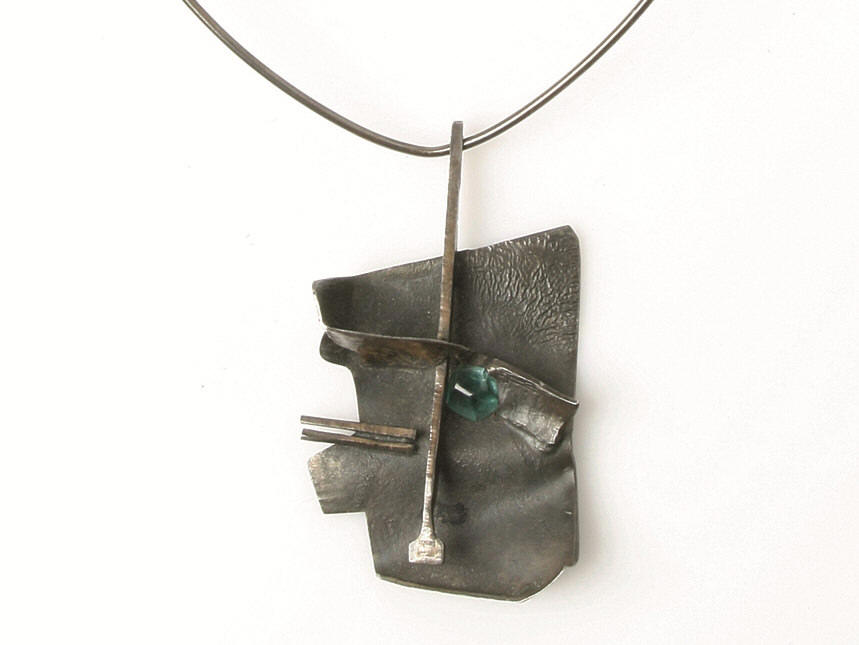 Since 1960 Ole Bent Petersen has maintained his own workshop in the center of Copenhagen and, since 1978, has been affiliated with the Georg Jensen Silversmiths A/S. It was there, in 1981, that he created his well-received design series, “Sunshine & Night." The “Sunshine” pendants show realistic scenes of cafés or bedrooms such as a chess table for two in front of a window, a coffee table for two with a palm tree in the background, and chairs that are miniature models of the world-famous Thonet Kaffeehaus chairs of bent wood. All these pieces were executed in brass overlaid with 14-karat-gold or in sterling silver and were sold with the original ribbon in grey or red or as a pendant alone. 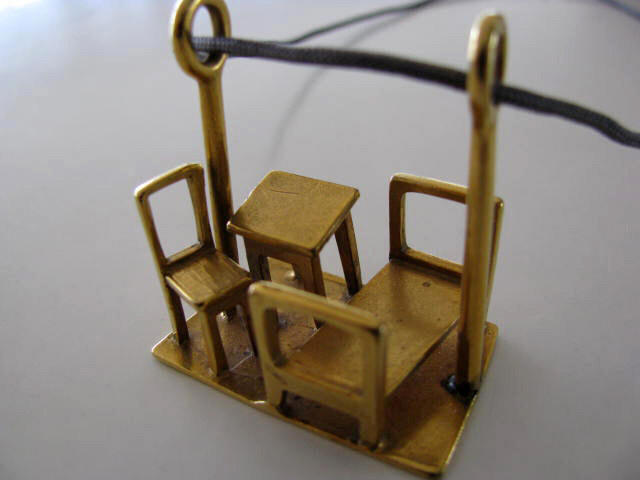 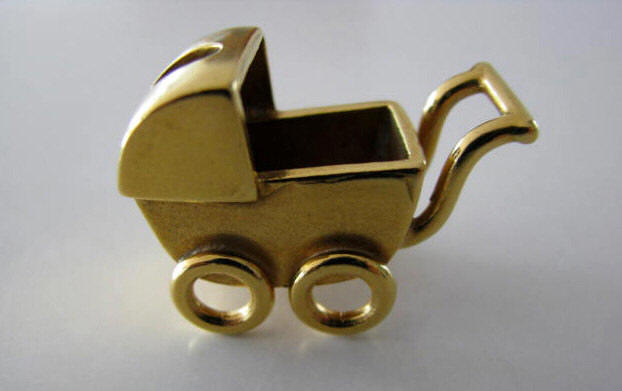 Was Ole Bent Petersen influenced by the art movements of his time that turned banality into art, such as Pop Art and Realism, when he illustrated moments of every day life by turning objects of daily use into metal? That idea may be too simple: his oeuvre goes further. He has pictured and sculptured his own life, scene by scene: the streets and staircases of Copenhagen were translated into a brooch or a ring, the ticket for the bus became a pendant, a circus tent was converted into a small sculpture on a wooden base, and a boat became sculpture for a sailing award. Thus he transformed his own life, his impressions, and his surroundings into wearable pieces of art and offered his view of his world to his audience--the wearers and collectors of his work.

Petersen has worked in gold as well as in silver and in gold-plated metals, using gems and enamels as decoration. He designed pendants, brooches, bangles, bracelets and cufflinks, and also functional sculptures, which were often commissioned by companies or institutions that wanted their awards to be unique and memorable works of art. 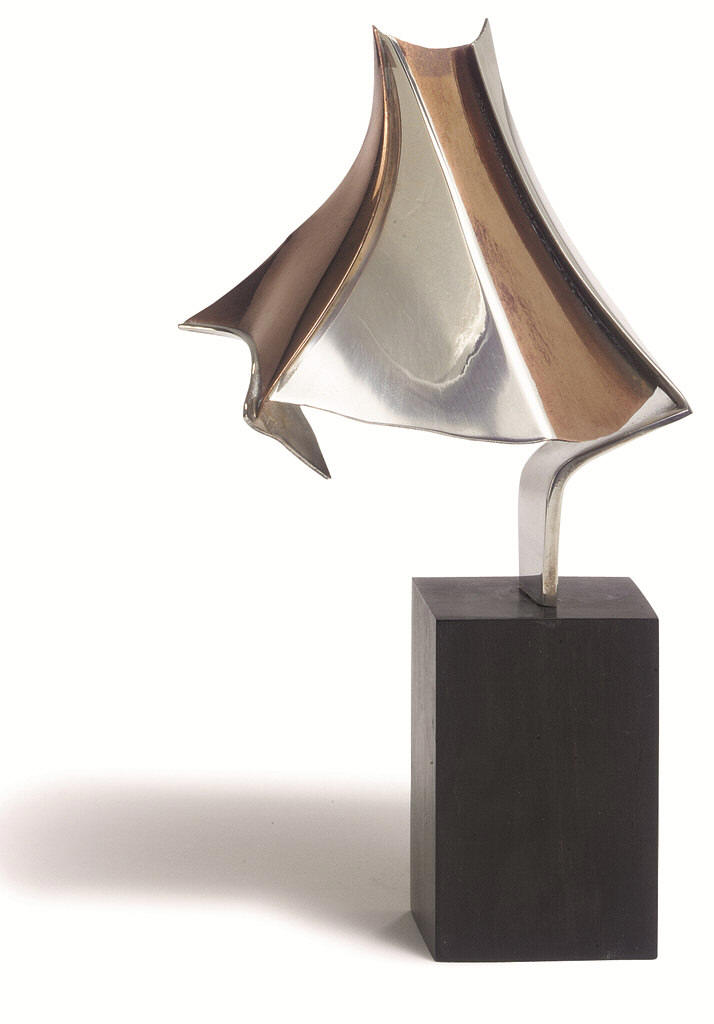 In 1979,1980, and 1982 Petersen was asked to be a guest lecturer at the Danish Academy for Goldsmiths. He was a jury member at the Council of the Danish Goldsmiths in 1980 and, that same year, was asked by the Danish State to design the insignia (the bishop's cross) for the bishops’ ordination in Greenland.

In 1981, 1982, and 1983 he served as a member of Statens Kunstfonds 3-mandsudvalg for kunsthandvaerk og kunstnerisk formgivning, the advisory board for the tri-monthly-selection of pieces acquired by the Danish Art Foundation from contemporary gold and silversmiths of Denmark.

He has received many awards, including the Danish craftsman’s annual award for 1983, and his list of exhibitions is long. His objects were presented in solo exhibitions at the Court Gallery, Copenhagen, 1978-1980; at Galleri Boje in Aarhus in 1983; and at the Danish Museum of Applied Arts (Det Danske Kunstindustrimuseum) in Copenhagen in 1984.

Ole Bent Petersen participated in numerous group exhibitions beginning in 1960, when the Danish Kunstindustrimuseet presented one of its regular exhibitions “Smykket I dansk eje”, which presents a selection of jewelry owned by the Danish people and museums. Up until the 1980s his objects were included in world exhibitions in Seattle, USA (1962) and New York (1964) and single works were shown at gallery shows in Germany, Monaco, Hong Kong, Brazil, the Netherlands, Paris, France, and Japan

There is little known about the person, Ole Bent Petersen, but his objects speak for him. In the foreword to an 1984 exhibition catalogue, Per Møllerup, editor in chief of Mobilia, the leading Danish interior magazine of the 1960s and 70s, describes him as honest and straightforward with a great dedication to his profession. Ole Bent Petersen died in 1998.

The research I did on the craftsman, Ole Bent Petersen, was interesting and I found that literature about the artist is scarce and, when he is mentioned, the respective books, catalogues and brochures are no longer available--no longer in print or hidden in the archives of museums or institutions. He is also not often mentioned on the Internet.

The information I did find has inspired me to dig a bit more, so this article may serve as a beginning overview.